The 2018-19 NHL season is rapidly approaching the mid-way mark. Stanley Cup favourites have differentiated themselves from the rest of the league, the foggy playoff picture has cleared up more and more with each passing game, and all the same, anything can happen by the end of the regular season.

Now is a good a time as any to start getting a sense of how teams have fared over the first third of the season. Of course, the standings tell one story, but other sources like NHL power rankings can reveal more insight.

How have different power rankings compared the 31 teams across the league up until now? I tried my hand at creating a set of data visualisations that show how teams have moved up and down with respect to several power rankings. I will be exploring The Win Column’s very own Power Rankings, but will also look at TSN’s 7-Eleven Power Rankings and the NHL’s Fantasy Team Power Rankings.

Let’s start things off with The Win Column’s Power Rankings. As of December 11, there have been nine editions of TWC’s rankings, which have seen plenty of movement to the delight of some fans and dismay of others.

TWC rankings are made without any personal biases, and instead use a weighted model with standard and advanced statistical categories to rank the teams. The model rewards teams with strong possession metrics and winning percentages, and conversely punishes teams without.

I made line charts to plot each team’s week-to-week ranking, and sorted by the latest week from the best team to the worst team. Lines are colour-coded by team colour, and I’ve included an additional visual component where line thicknesses are related to each team’s point totals up to and including all games ending Sunday December 9.

The Tampa Bay Lightning led the league with 47 points, where as the Chicago Blackhawks (and Los Angeles Kings) were at the very bottom with 23 points each. I wanted the team with the most points to have a line width that was approximately four times thicker than that of the team with the least points, which should provide enough visual differentiation across all 31 teams.

Without further ado, let’s see how the teams have fared within their own divisions thus far. 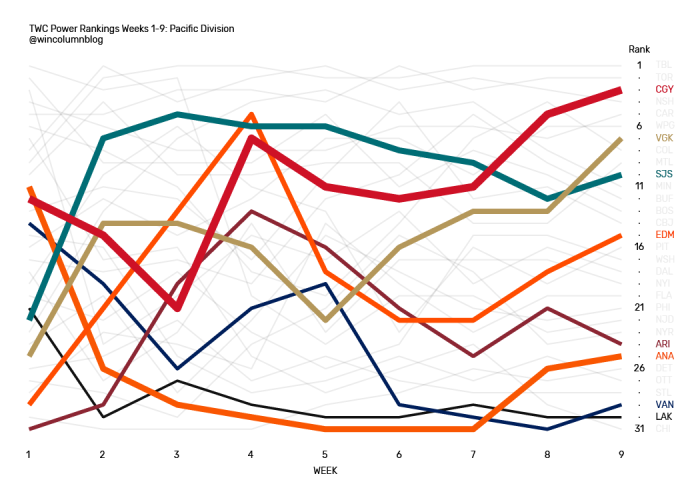 The Pacific Division has been remarked as the worst division in the league. Even with the recent surges from the Vegas Golden Knights and Edmonton Oilers, the division is still terrible on a whole.

There are only three Pacific teams with positive goal differentials. The Calgary Flames lead the way with a +22, followed by the Golden Knights at a distant +5 and San Jose Sharks at +1. The current second seed—the Anaheim Ducks—are somehow -13. 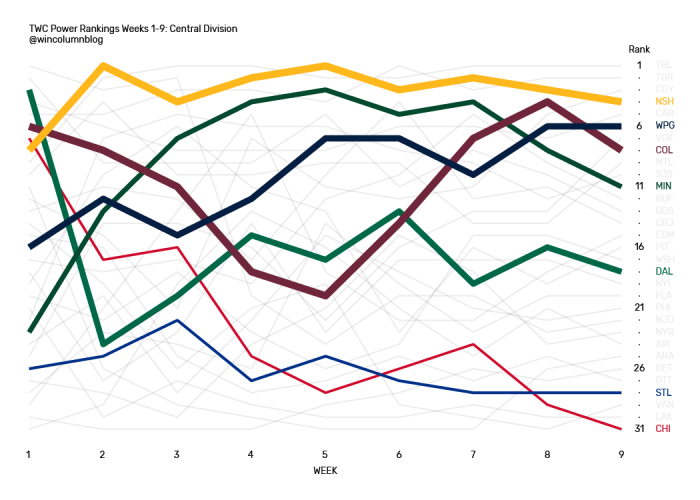 The Central Division is undoubtedly better than the Pacific. The chances of the Central sending five teams to the playoffs far surpasses their Western Conference counterpart.

The powerhouses have been identified. Predators have been dominant for much of the season, the Jets are rounding into form, and Colorado’s elite top line has won them more games than not. 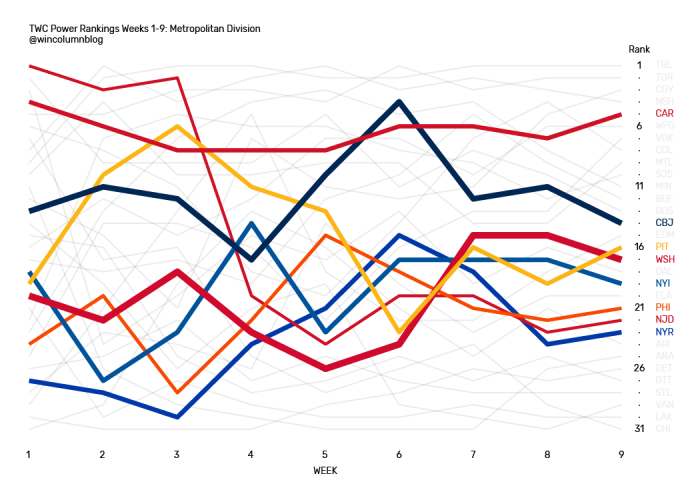 Probably the most confusing division so far, the Metropolitan has been quite average on the whole. No Metropolitan team has stood out as contender, and they also don’t have any teams in the basement. A handful of teams have seen average play, which largely contributes to why there is the bottle-neck in the middle of the league.

There is strong argument that the playoff spots for the Metropolitan are the least established. A small winning or losing streak can easily change the playoff picture in this division. 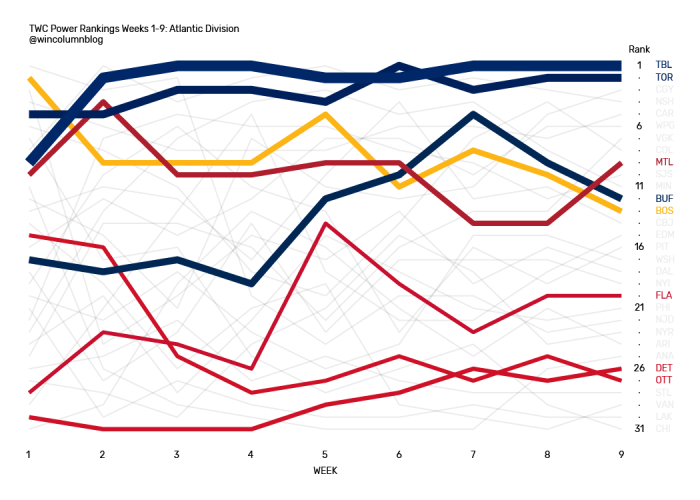 Home of the #1 and #2 teams, the Atlantic Division boasts the best in the league, but is also plagued by mediocre teams. The race between the Tampa Bay Lightning and Toronto Maple Leafs will be one of the best stories this season.

On top of that, there’s a secondary race between the Buffalo Sabres and Boston Bruins. One team is elated to be getting wins while the other is probably upset they haven’t gotten enough. 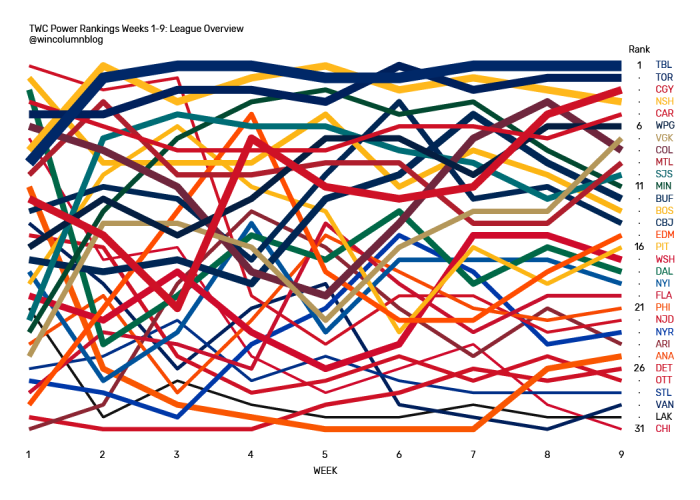 To enjoy one more look at the league on a whole, the charts are combined into one highly chaotic graph. There’s only so much to dissect in this view, but it’s interesting to see from a high level which teams have met or exceeded expectations, and which teams have dropped off a bit too far to have a meaningful season anymore.

Which teams surprise you the most? Are there other power rankings that you would like to see visualised? Let us know in the comments or at @wincolumnblog.