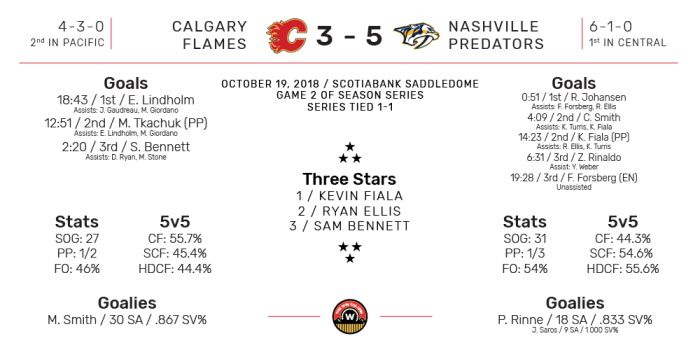 The Calgary Flames welcomed the Nashville Predators to the Saddledome last night to play their second match of the season. The last time these two teams faced off, the Flames were dominant and convincingly beat the Predators with a 3-0 shutout. Things were a bit different this time around.

Less than one minute into the game, Ryan Johansen was fed a perfect pass from Filip Forsberg and beat Mike Smith to put the Predators up by one. Not much happened for the next half of the period as both teams opted to flex their defence over their offence. The Predators were a bit more successful on that front as the held the Flames to just one show over the first 18 minutes.

A little bit of offensive pressure from the Flames in the 19th minute of the first period finally led to the Flames’ second shot of the game, which is also known as the Flames’ first goal of the game. A sneaky behind-the-net pass from Johnny Gaudreau led to a perfectly placed shot by Elias Lindholm to beat Pekka Rinne.

The Flames mustered just three shots in the first, with the last of three coming at 20:00 when Giordano threw a shot on net at the whistle.

In the second period, the Flames found themselves trailing early at the hands of Craig Smith. Kevin Fiala found Smith wide open, who went one-on-one with his Smith counterpart. In Matrix-like fashion, Smith slowed the puck down with some nifty stickhandling and beat Smith with a backhand deke.

Despite the 2-1 score, both teams looked weary and tired, playing largely lacklustre hockey. It wasn’t until the first Flames powerplay of the game that signs of life started to show up.

Offensive zone pressure plus Matthew Tkachuk in front of the net was the right equation for the powerplay, as a Lindholm shot was deflected off of Tkachuk’s skate and redirected right past Rinne to tie the game at two a piece.

Not too long after, James Neal took a double-minor for high-sticking, and the Predators would capitalize on their powerplay opportunity to regain their lead. A flurry of action in front of the net led to the puck pinballing between players before it found its way to Fiala, who had a wide open net to shoot at.

The third period opened up with one of Sam Bennett‘s best goals. Receiving a pass from Derek Ryan, Bennett swiftly beat Rinne to tie the game. Fiala would run into his goaltender in the same play, possibly injuring Rinne and prompting Juuse Saros to enter the game.

As the Flames pushed for their first lead of the game, their plans would get spoiled by Zac Rinaldo. The Predators gained the zone with a two-on-one, and a quick release from Rinaldo would rise above Smith’s blocker side and restore the Predator’s lead. Rasmus Andersson was the sole defenceman back and wasn’t able to prevent the shot.

Despite having an answer for the first three goals against, the Flames could not find a way to tie it up once more. While there were grade-A chances, Saros would not be beat, and the Predators ultimately walked away with the win.

Despite the recognition that the Flames had to be ready to play right at puck drop, they started off slowly and found themselves trailing early. Fortunately for the Flames, the Predators weren’t exactly chomping at the bits either. The dull start was likely in the Flames’ favour as they didn’t find themselves in too big a hole.

The Flames looked discombobulated in this game and were lucky that the Predators were not more opportunistic. In all fairness, the inverse could be true as well. Giving the goalies credit where it’s due, both Smith and Rinne were sharp when they needed to be, limiting the scoring in the first two periods.

They probably did not deserve to win this game at all, but at least once the game started to pick up, the Flames were up to task. It’s a bit of a broken record at this point, but these Flames don’t give up quite as easily as they did last year. Maintaining that type of tenacity for the rest of the season is a good recipe for success.

All in all, the Flames did just okay against one of the all-around best teams in the league. The Predators negated a lot of chances the Flames might have had by being the better team defensively, and they were able to permeate the Flames defence a bit more frequently too.

There’s a lot left to be desired from the Flames, but last night was a good indication that they are up for any challenge. They’ll need to stay ahead of their opponents in terms of pace and working on ensuring quicker starts will be a good first step.

Let it be repeated that seven games into the season, the Flames remain the only team to have beaten the Predators.

The Gaud, the Bad, and the Ugly

Gaud: Bennett looks to be riding one of his trademarked hot streaks, and he was rewarded with a fantastic goal. Hopefully this streak turns into permanence and the Bennett the Flames thought they were getting when they drafted him will be here for good.

Bad: The lack of urgency in the first period allowed the Predators to shut the Flames down and keep them to the outside. What could have been a good opportunity to gain a lead was largely fizzled out by an uninspired effort.

One thought on “About Last Night #7: Flames fall to the Predators and lose at home for the first time”