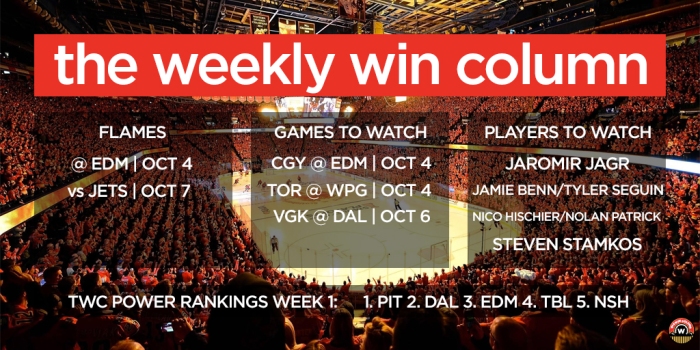 Well, hockey fans, we’re finally here. The 2016-17 NHL season is upon us after yet another grueling offseason. Sure, there’s the draft and free agency, but we’re glad that real hockey is back, even if it means we won’t see Jaromir Jagr wear an NHL uniform this year – though we’re still hopeful. This season, we’re launching a weekly feature: the Weekly Win Column. This feature, posted every Monday, will feature a breakdown of the previous week of NHL action, and a preview of the week to come. You’ll find a selection of interesting games to look out for, a handful of players to watch, and an update to our weekly power rankings. Let’s dive in!

We signed Jagr. All other hockey news is irrelevant. But if you’re so inclined, read further for some interesting tidbits about the first week.

With this being the opening week of the season, there are naturally many “firsts” for many teams. However, a few stand out above the rest for a variety of reasons.

After defeating the Flames in all 4 meetings last season, the Oilers open their regular season against Calgary at Rogers Place. With a newly bolstered blueline featuring Travis Hamonic, and a new duo in the crease led by Mike Smith, the Flames will be seeking vengeance against Connor McDavid and the Oilers. The first win in this season’s Battle of Alberta is up for grabs.

The first regular season game in history for the new expansion squad in Vegas will against Dallas at the American Airlines Center. The Stars, who missed the playoffs last season, added several key pieces to their roster in the summer including Ben Bishop, Martin Hanzal, and Alexander Radulov. They are definitely loaded with offensive talent, and will be a difficult matchup for the mixed bag of expansion casualties in Vegas. The Golden Knights will be backstopped by Marc-Andre Fleury, fresh off back-to-back Stanley Cup championship seasons in Pittsburgh. He still has the ability to steal games, so this one will be a fun game, and one for the history books.

The first installment of this year’s Auston Matthews vs. Patrick Laine battle will happen on opening night. You probably won’t be able to avoid hearing about this game if you tried, but it’ll be one worth watching. Both teams look poised to earn a playoff spot this year, Winnipeg by overcoming severe injury troubles and a shaky crease last year, and Toronto by seeing their young guns take a step forward and build upon their success from last year. Both teams feature a high powered offense and we should be treated to an extended cut of highlights.

The major transaction this summer was yet another one-for-one trade. It saw Brandon Saad returning to Chicago in exchange for Artemi Panarin. But we won’t be looking out for any big returns like we did last season for PK Subban (<3), Shea Weber, and Taylor Hall. Still, there are some interesting players to keep an eye out for in the opening week.

After “down years” which saw the Stars’ stars post 69 and 72 points respectively, both will be looking for a bounce back year with new linemate Radulov. Dallas is going to be a really fun team to watch this year, and might even win some games now that Bishop is tending their net. Look out for this dynamic duo to start off the season with a bang.

Not carrying the same generational sticker worn by the top two picks from last season, these two rookies both have legitimate shots to make some noise on relatively shallow Devils and Flyers teams. Don’t underestimate the talent of these two, they’ll turn lots of heads this year. Maybe one will even score 4 goals in their first game.

The Lightning could be scary good this year. Stamkos is still an elite player in the league, even after battling injuries the last few years of his career. Before going down in November last season, he was over a point-per-game player and could get off to an explosive start alongside Nikita Kucherov. Stamkos is definitely a guy to keep your eye on in opening week.

Their season opener against Edmonton is a huge game. It will be the first time seeing Travis Hamonic and Mike Smith suit up for the Flames, and both will be busy all night trying to keep Connor McDavid and Leon Draisaitl at bay. The Oilers walked all over the Flames last year, and nobody on the team wants that to happen again. The Oilers will be without Andrej Sekera but other than that, their team will be healthy and motivated. This will also be the first game for Sam Bennett since he lost his razor, and after what we saw from him in the preseason, it looks like he will finally take a big step forward this year. If the trio of Monahan, Backlund, and Bennett can get anchor the top 9, the Flames should be able to throw a lot of high quality pucks at Cam Talbot. It will also be interesting to see how Mark Janiowski fares against one of the best offenses in the league centering the fourth line with Matt Stajan and Curtis Lazar.

The Flames will then host the Winnipeg Jets on Saturday night for their home opener. The Jets gave them some trouble in the preseason in their first matchup, but the Flames rallied in their preseason finale winning 3-2 in the shootout. This will be an interesting tilt; another real test for the new blueline against a truly prolific offense. Both teams should be well rested for this game too, so it should be a fun one to watch. If you’re heading to the ‘Dome to see the action live, you won’t be disappointed.