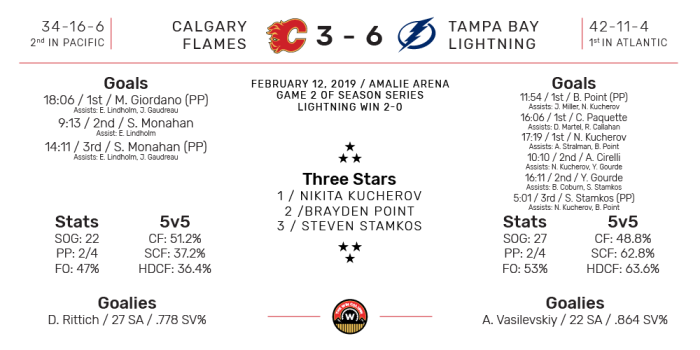 The highly anticipated rematch between two of the league’s top teams had many folks excited to see some Grade-A hockey. The Calgary Flames were looking to break out of mini-slump and show the Lightning that they’ve got some competition.

The game started off with fast action going both ways. Active sticks caused turnovers on both ends of the ice; a back and forth game between these two teams was nothing short of top-notch entertainment. The game remained scoreless until midway through the first. In a span of less than six minutes, the Lightning strung together three straight goals.

Brayden Point scored the first goal thanks to some pretty passing on the power play. The Flames pushed back after being down early, but a second goal coming at the hands of Cedric Paquette, followed by a third goal from Nikita Kucherov would bring some panic to the Flames’ bench.

Despite the string of first period goals, Bill Peters opted to keep David Rittich in net, contrasting the decision making in the Flames’ recent tilt against the Sharks.

Late in the first, two straight penalties to Paquette and Alex Killorn would give the Flames a lengthy 5-on-3 power play. It didn’t take long for the Flames to score their first of the game courtesy of a perfect shot from Mark Giordano.

Tampa Bay controlled much of the second period, but it would be the Flames to score again to pull within one goal. A loose puck on a messy face-off landed right on Sean Monahan‘s stick and he made quick work in beating Andrei Vasilevskiy.

Less than one minute later, the Lightning restored their two goal lead. Anthony Cirelli found some space in front of the net and picked up a slick pass from Kucherov before neatly tucking the puck past Rittich.

With the Flames having a hard time gaining momentum, the Lightning took advantage and padded their lead to three goals. Braydon Coburn shot the puck towards the net which went in off of Yanni Gourde.

Down three goals heading into the third, the Flames faced a daunting task in mounting a comeback. Said comeback became even harder as an untimely Garnet Hathaway penalty led to a laser of a goal from Steven Stamkos.

Time quickly passed in the third; the Flames shot at any points quickly dissipating as well. Under six minutes left in the third, the Flames scored on a power play. Monahan picked up his second goal of the night.

That would be all for both teams, as no further scoring was necessary for the game to close out. The Flames got doubled up against the Lightnight; 6-3 for the home team, final score.

Maybe being down early against the top team in the league was too big of a task to overcome. Maybe the Flames’ recent struggles caused them to feel the pressure against the unwavering Lightning.

After one of the best games of the season the first time these two teams met, the sequel didn’t go as well for the Flames. It’s easy to say all teams go through slumps, but after seeing the Sharks over take first in the Pacific just one night prior, the Flames sure would have liked to have earned a point or two against the Lightning.

With the Pacific race tightening up thanks to the surging Sharks, losses like these sting much worse. Plenty of games left in the season, but the Flames should look to break out of this slump sooner rather than later if they want to keep the Sharks at bay.

The Gaud, the Bad, and the Ugly

Good: Two power play goals for is a good spark for the Flames’ special teams.

Bad: Two power play goals against is a bad hiccup for the Flames’ special teams.

Ugly: The defence was not good, many Lightning goals coming off of defensive miscues.

Standings: 6th in the Atlantic

One thought on “About Last Night #56: Flames fall in rematch against the Lightning”