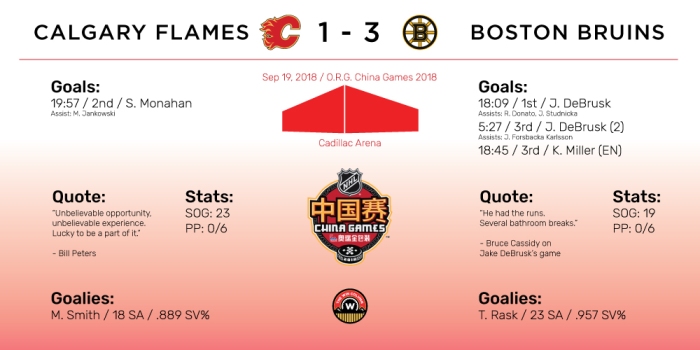 In their second overseas contest in the ORG NHL China Games, The Calgary Flames fell to the Boston Bruins 3-1 this morning. Playing in the Cadillac Arena in Beijing, the Flames will make the long journey back to Calgary with bonds and memories that will hopefully help them start the season on a high note.

The roster iced in their second game was starkly different than in the first. Matthew Tkachuk, Mikael Backlund, and Michael Frolik were all scratched, and every player who did not play in the first game was given the opportunity to skate in this one, including roster hopefuls Rasmus Andersson and Morgan Klimchuk.

It was not a very exciting game scoring wise, with the first goal coming off the stick of Jake DeBrusk at 18:09 of the first period. Tuukka Rask was brilliant for the Bruins throughout this game, and from his angles and positioning around the crease, was clearly more comfortable playing on the big ice surface than Mike Smith.

Sean Monahan would score his second goal of the China series at the end of the second period. Coming out of the penalty box after serving a minor penalty, a Mark Jankowski stretch pass sent Monahan in all alone on Rask and he went top shelf to equalize the game at one goal apiece.

That would be all the scoring the Flames could muster however, as the Bruins would add a pair of third period tallies from DeBrusk and Kevan Miller to win the game 3-1.

The Flames finish the China series with a record of 0-1-1. Including the domestic preseason games, the Flames’ record sits at 0-2-1.

No need to overreact, it’s still just the preseason. It’s hard to take much at face value during these games, especially considering the fact that these games are in China on international ice. The Flames were never going to be playing at 100%, nor should they be at this point in the preseason. If the outcome of the O.R.G. China Games irks you, that’s fine, but the sky isn’t falling by any means.

Playing without the 3M line, the Flames didn’t look like a complete team, especially with the fourth line of Klimchuk, Lazar, and Peluso, which is realistically a fifth line on this team. All three players are likely AHL bound, and they all appeared to be playing at that level this morning. Peluso looked especially like he was a step behind the rest of the players, which became more obvious as the game went on. The same goes for Dalton Prout, who formed an odd couple of sorts with Andersson on his left side.

Smith had a very lackluster game, only facing 18 shots, but that’s to be expected in his first full game since April. His puck-handling rust particularity hasn’t worn off, as the eventual game-winner was cause by a mishandle behind the net. He was able to make a handful of beautiful saves though, including a beautiful stop on a short-handed two on one.

Despite the loss, there were a lot of positives to take away from this game. Sam Bennett looked like a much improved player in comparison to the first game. He seemed very comfortable playing next to Jankowski, and was able to earn some key PK time from his coach. Monahan continues to impress; judging from his release, his new wrist could be spring-loaded for all we know. The Giordano-Brodie pairing also continues to inspire confidence, after another solid performance from both. Noah Hanifin was again a standout on the blueline, showing off his smooth skating and impressive vision on the ice. He will definitely be a player that will turn heads this season, especially in a market with significantly more media presence than Carolina.

All in all, the real impact of the O.R.G. China Games had on the Flames is on the social side rather than the actual hockey. It will be interesting to see how fast, and well, the team is able to acclimate back to North America. The team cannot afford to come out of the gate sluggish again but, with the self-proclaimed bonds that were made overseas, hopefully team chemistry was given a head start.