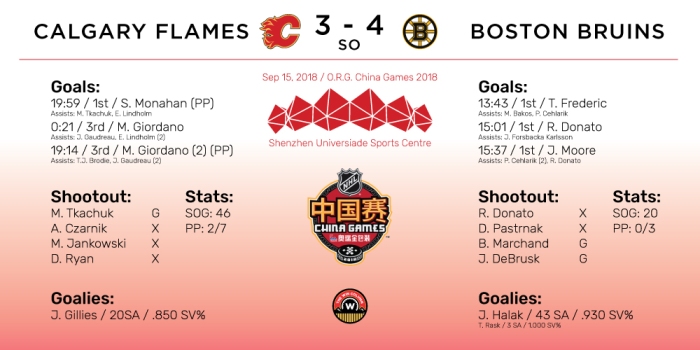 The Calgary Flames and Boston Bruins kicked off the 2018-19 preseason across the Pacific Ocean, playing in the second iteration of the O.R.G. NHL China Games. Playing out of the architecturally-astounding Shenzhen Universiade Sports Centre, the new-look Flames got their first real test as a team.

The Flames opted to bring essentially their entire regular season roster over to China, which in theory would be rare, but it’s a good opportunity for the players to get used to Bill Peters, as well as each other.

The Flames looked fresh out of the gates, playing fast paced hockey to the delight of the Shenzhen crowd. Unfortunately a series of bad plays over a span of two minutes turned a scoreless game to a 3-0 deficit as the Bruins capitalized on the Flames’ mistakes. Trent Frederic, Ryan Donato, and John Moore all beat Jon Gillies in rapid succession to gain the early lead.

With one second remaining in the first, Sean Monahan scored on the powerplay, putting away any doubts of any lingering problems after four offseason surgeries (he even started taking faceoffs mid-game despite Peters saying Elias Lindholm would take them on that line in lieu of Monahan’s surgeries).

The score remained the same after two, but it didn’t take long in the third for the Flames to pull within one. Twenty-one seconds in, Mark Giordano found the back of the net, picking up a perfect pass courtesy of Johnny Gaudreau.

Going all the way to the end of the third, the Flames converted on a 5-on-3 powerplay, Giordano scoring again with a seeing-eye shot that beat Jaroslav Halak to tie the game.

Overtime would solve nothing, so the first game of the preseason would see its end in a shootout.

Matthew Tkachuk handily beat Halak to put the Flames up, but with no other Flames scoring, the Bruins took the win after Brad Marchand and Jake DeBrusk scored on the Bruins’ third and fourth attempts.

Seeing as this was the Flames’ first full game together, there is no need to overreact or over-analyze this morning’s performance. That being said, there were a few notable highlights that should be mentioned heading into Game #2 of the O.R.G. NHL China Games.

Giordano and T.J. Brodie playing together was great for nostalgic reasons, but they also looked good together. After taking a huge step back last season, Brodie looked far more comfortable on his off-side playing with the captain. A hopeful sign of things to come this season.

Lindholm looked right at home on the top line with Monahan and Gaudeau, and the other new forwards looked good as well.

The biggest surprise of the evening had to be Austin Czarnik. He was impactful whenever he was was on the ice, using his speed to his advantage, and was easily the best Flame. With many folks having limited knowledge of his game, it was a welcomed surprise to see Czarnik be as good as he was.

Gillies’ lapses were short-lived and he made some spectacular saves through the rest of the game. Even though Mike Smith was supposed to get the start, perhaps it was a blessing in disguise to have Gillies get some much needed game action.

The biggest takeaway from last night was that the Flames looked like a new team. Being able to deploy four well-balanced lines was a treat. The Flames were a much faster and agile squad compared to last season, with Derek Ryan and Czarnik as the obvious standouts in that department. While making predictions at this point is like trying to read tea leaves, it was a sure welcome sign to see the Flames back on the ice looking as good as ever.

View all posts by John MacKinnon