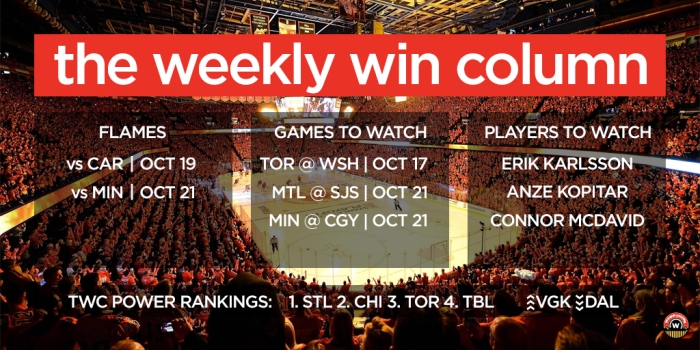 What a week in the NHL. The Vegas Golden Knights finally earned their first loss in franchise history, the last team to shed undefeated status. Auston Matthews and Alex Ovechkin are still scoring lots of goals, and the Edmonton Oilers look like a shadow of the team who shutout the Calgary Flames on day one. Parity has its benefits; every team has a chance to win every night. Unless, of course, you play for the Arizona Coyotes. They have yet to enter #thewincolumn, and it doesn’t look like they will anytime soon.

The Flames played four games last week, going 3-1. They finally won at the Honda Center, beating the Anaheim Ducks 2-0 off a franchise-record-setting 43 save shutout from Mike Smith. The Flames didn’t just win because of Smith, though, they were fortunate enough to be boosted by the good fortune of the newest good luck charm: Jobu.

Smith was rolling again two nights later, earning a 4-3 overtime win against the Los Angeles Kings. Sean Monahan scored his 8th career OT goal and Matthew Tkachuck scored twice as a gift for his Mom’s on her birthday. Jaromir Jagr also made his much anticipated Flames debut. Despite being rusty, he looked strong on the puck and should be a good addition to the roster this year. The Flames did forfeit a two goal lead, but Smith didn’t have much of a chance on any of the Kings’ goals that night.

The whole team decided to take Friday night off and got blasted by the Senators on home ice. Smith was pulled and Eddie Lack made five saves on six shots in relief.

Smith started the next night against the Vancouver Canucks and made up for his last game in a big way. Although there were a combined 12 powerplays in the game, the Flames managed to win convincingly, 5-2. Dougie Hamilton scored a beauty, and Mark Giordano finished a pretty shorthanded rush to score his 100th career marker. After their latest triumph, the Flames sit atop the Pacific Division.

Three games you should tune into because they will be fun and interesting. Take our word for it.

The Minnesota Wild surprise me every year and this year is no different. Backstopped by Devan Dubnyk, the Wild will try to win in the second of a back-to-back against the Flames. It will be a good test for Calgary who should be well rested after playing just one game in six days.

Ovechkin’s goal scoring has made headlines all week, and for good reason. The Great 8 looks like a man possessed, and some are even talking about him hitting the 50 in 50 mark this year. On the other side, Matthews looks to be in another gear after an already impressive rookie year. These two goal scoring dynamos collide in what should be an entertaining tilt.

Two teams who have wildly disappointed early this season go head to head this Tuesday in the Shark Tank. The San Jose Sharks look to Brent Burns and Joe Pavelski to drive their offense, but both have been relatively quiet to start the year. The Montreal Canadiens are severely struggling to score goals, and Carey Price looks mortal for the first time in a long time. The dam will surely break for one of these teams.

Three players to keep an eye out for this week.

With the Senators sending down Thomas Chabot to Belleville, this could signal the return of superstar Erik Karlsson. Keep an eye for his debut, hopefully we’ll get to see his talents on the ice soon.

After a disappointing showing last season, Anze Kopitar looks like he’s back on track. The way he’s been playing lately, he could easily challenge for a top-10 spot in league scoring. Never count out the Kings, especially when Kopitar is around.

The Oilers have looked truly abysmal after they won on opening night. But their slide can’t continue when their roster includes Connor McDavid. He just won’t let the Oilers descend into the depths of the Pacific. Look for him to buoy his team back into the Cup contention conversation.

After four games last week, the Flames open week three with a four day break. They’ll likely work on fixing their lack of discipline and hopefully give Smith some much needed nap time. Their first bout is against the Carolina Hurricanes on Thursday where Lack will face his former team. The Canes have had an average start to the season (1-1-1) but were a popular darkhorse playoff team. Hopefully the Flames can continue on their recent success and bank two points.

Calgary then play host to the Wild on Saturday. With the Wild playing in Winnipeg the night before, the Flames should be able to capitalize on the tired team who will likely start their backup goaltender, Alex Stalock.